"If you don't know at least part of the story, if you don't know that there is a story, then we shall bequeath upon our descendants a sense of shame. We could not save those who died but we can save them from dying again because to forget is to kill them again. So why should the next generation in the 21st century live with that shame? For the dead and the living, we must bear witness."

The CUJF Holocaust Education committee serves as a resource to help school systems comply with the 1990 Illinois state mandate to teach about the Holocaust in fifth, eight, and tenth grades. (Public Act 86-780)

The committee is also dedicated to providing assistance to all individuals in the greater Champaign-Urbana area who wish to address the universal lessons to be learned from the Holocaust.

The committee sends information about the Holocaust to public school teachers and college students majoring in education; sponsors and grants scholarships for in-service teacher training programs; provides videos, books, and newspapers to local libraries and schools and speakers to area classrooms.

Search the archives of the American Jewish Joint Distribution Committee, which has a large collection of documents and photographs relating to its work during World War II. There is information about the legacy of the JDC's work rescuing and providing relief during and after the Holocaust.

Holocaust Education Trunks provide materials and ready-to-use units that vary in readability and format, are grade-appropriate, and are relevant to all learning styles. 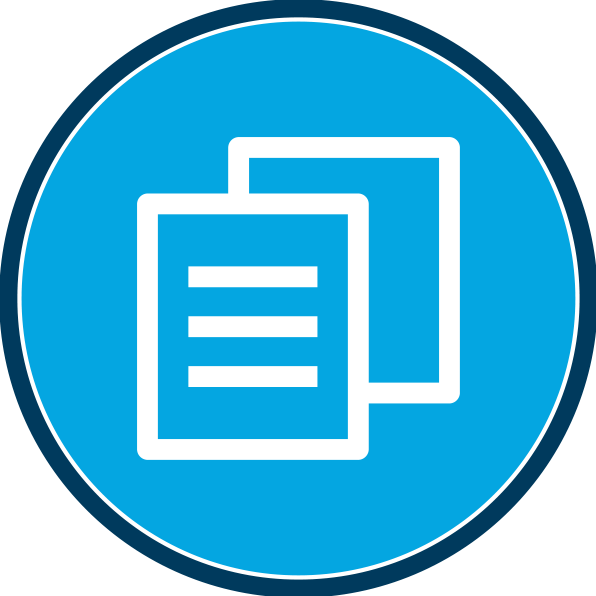 In 1990 Illinois became the first state in the country to mandate each public elementary school and high school to include in its curriculum a study of Holocaust history. In 2005 The mandate, Public Act 094-0478, was expanded to include other cases of genocide.

Illinois Mandated Units of Study Guidance Document is to serve as a guide for districts, schools, and teachers in interpreting the current mandated units of study in Illinois.

Addressing the "Null Curriculum": Teaching about Genocides Other than the Holocaust 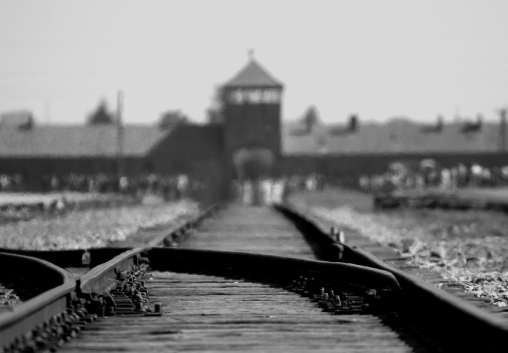 Diaries and Memoirs: Using Primary Sources to Teach The Holocaust

Lodz Ghetto A Model of Destruction: An Echoes and Reflections Workshop

How Far Is Too Far? Holocaust Education In Middle Grade Classrooms 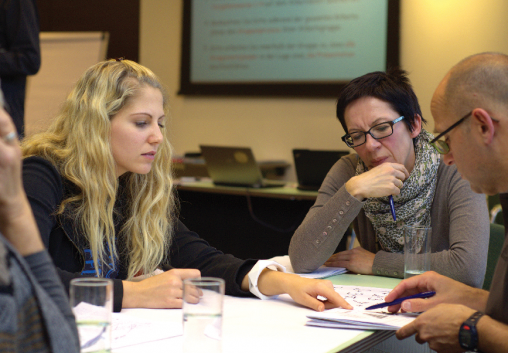 The Holocaust Education Center invites you to participate in a workshop presented by the Anti-Defamation League (ADL):  Teaching the Holocaust - Empowering Students 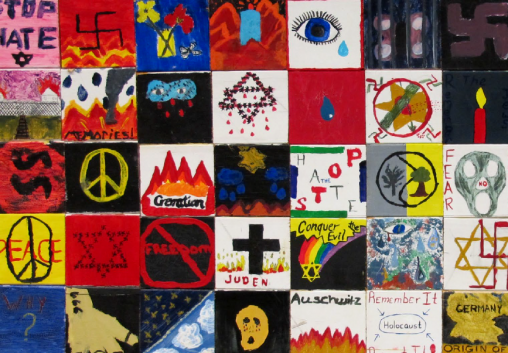 In commemoration of Yom Hashoah, Holocaust Remembrance Day, the CUJF Holocaust Education Center is sponsoring a student exhibit featuring original works on the study of the Holocaust created by local students from Champaign and Ford Counties. Sunday, April 19 – Wednesday, April 22 at Sinai Temple. 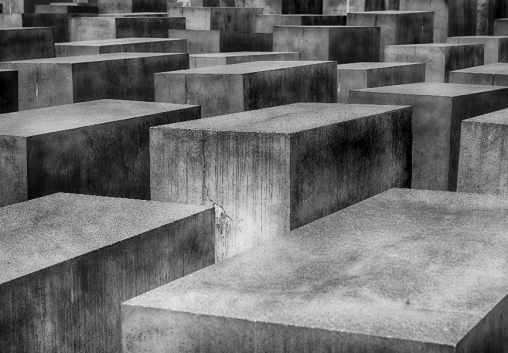 LEARN HOW TO APPLY 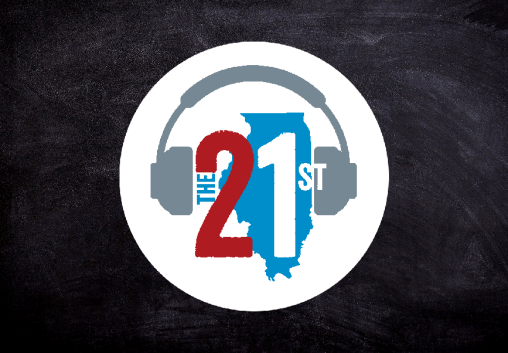 The Current State of Holocaust Education

Holocaust Education Chair Brian Kahn and CUJF Director Linda Bauer are discussing teaching about genocide and the Holocaust on WILL-AM 580's "The 21st" radio show: strategies and challenges of dealing with this important, evolving issue. 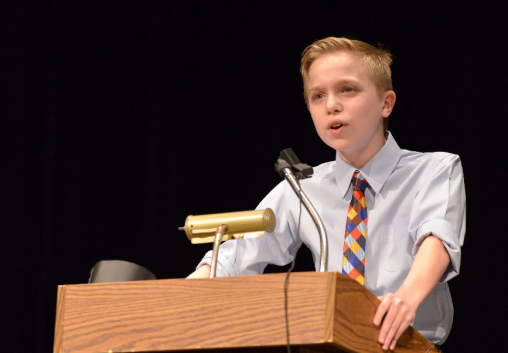 Countryside 8th grader and filmmaker, Max Libman at his presentation "The Holocaust: Remembering the Past as We Stand Together for a Brighter Future" at Countryside's Gym and Performing Arts Center. 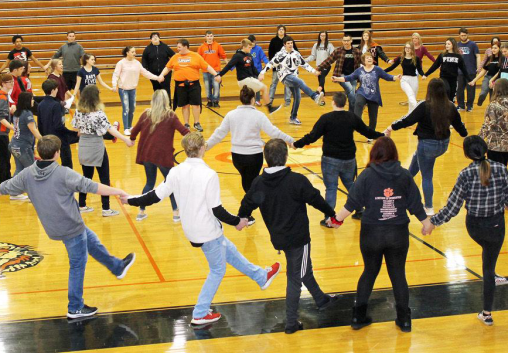 County Classrooms Learn About the Holocaust

In at least two Vermilion County classrooms, the 75th anniversary of the liberation of Auschwitz will be observed Monday, which also is the International Day of Holocaust Remembrance. 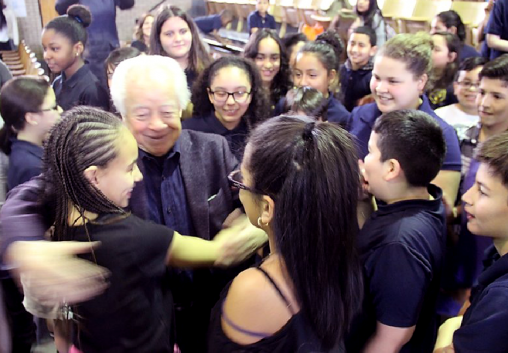 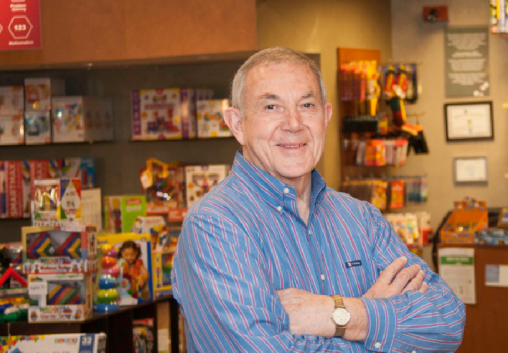 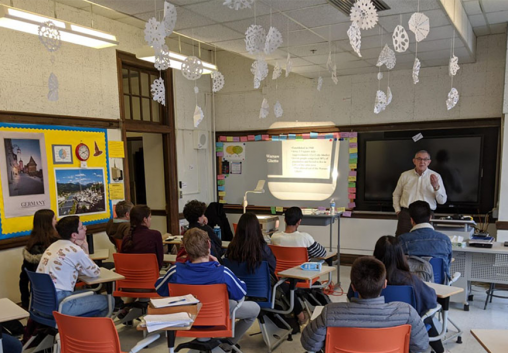 Students in University Laboratory High School’s German 4 class were privileged to welcome Holocaust survivor Dr. William Gingold as a guest speaker in their class. Gingold, whose family fled the Warsaw Ghetto, shared his story publicly for the first time with Uni students and faculty.

The presentation was part of teacher Jenny Robins’ unit on WWII and the Holocaust, where she brings in community members to help students better understand this difficult period in German history.

Gingold shared the story of his family’s escape, their time in a camp in Russia, his experience in a DP camp, and, finally, his family’s journey to the U.S. where they settled in Milwaukee.

His story was illustrated by a series of photos, as well as by passing around “Tunnel, Smuggle, Collect: A Holocaust Boy”, a book about Gingold’s older brother, Sam. The book was researched and written by Gingold's nephew, Jeffrey Gingold.

Gingold’s vivid and touching account inspired both tears and hope, and the Uni community is honored to have been the first to publicly hear his story. We appreciate the efforts of Brian Kahn, director of Holocaust Education for the Champaign-Urbana Jewish Federation, who facilitated the talk.

William (Baruch) Gingold, a Holocaust survivor from World War II, was born September 20, 1939, one day before the hospital, (in which he was born), was bombed and destroyed by Nazi, Germany. The Gingold’s (immediate family) were incarcerated in the Warsaw Ghetto until eventually escaping to the Russian border in January of 1942. Upon reaching the Russian encampment, they and other Jewish people were transported in trucks to trains which took them to a Siberian lumber work camp. In November of 1942 the Gingold’s were allowed to leave the camp and move about within Russia and eventually finding their way to Zhambly in Kazakhstan.

In the spring of 1945, (May 8th), Hitler died, and Germany surrenders. Upon those events, the Gingold’s reach their goal in September of 1945 by arriving at and entering the American Sector in occupied Berlin. Shortly thereafter in May of 1946, the Gingold’s were sent to the Föehrenwald Displacement Camp.  After six years living at this camp, the Gingold’s emigrate to the United States of America in May of 1951 and arrive by boat to Ellis Island, NY. Soon thereafter the Gingold’s are resettled in Milwaukee, WI, where new lives and many transitions began in their start of the American dream and way of life. 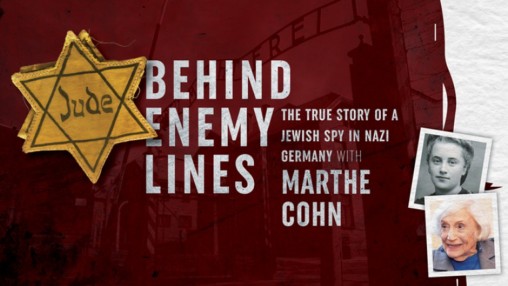 World War II spy Marthe Cohn, the author of Behind Enemy Lines: The True Story of a French Jewish Spy in Nazi Germany, is sharing her story of joining the French intelligence service, posing as a nurse, crossing enemy lines and relaying information about the Nazis back to the French.